Last night I caught a promo screening for the new Warner Bros. movie “Sucker Punch” … Honestly, I went into this having skimmed through a trailer and not really being clear what it was about, but it looked like it might be cool. Well, I think the best way to sum it up is that I still don’t get where the title comes from and I feel like the recipient of a “Sucker Punch” after having sat through this mess of a movie for 2 hours! I’m no geek, gamer or comic book freak…is that the audience this is supposed to appeal to??? 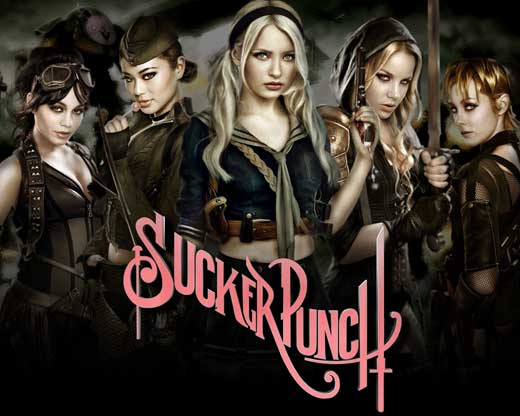 Let’s look at the ‘bright’ side. Directed by Zack Snyder of “300, ” (which I love), the film shows off a lot of the same great viewpoints, cinematography and awesome post production, special effects and visuals. The female cast is no doubt attractive and make for an alluring clique of ladies – I noticed Vanessa Hudgens and a former MTV Real World-er in the mix. Now before I state what didn’t work for me….this film fits into an epic action fantasy category, and the fantasy was a bit TOO “fantastic” for me. Basically the girls in the film are banished from their families or what not, to work in a brothel-type institution as dancers who entertain male clientele. The movie’s main character, Baby, has a unique, captivating style of dance, that whenever she goes into her “routine” it doubles as these fantasy action sequences where her crew becomes these bad-ass type action chicks who work are fearless when it comes to fighting and shooting. Okay, so that’s cool if you’re into that type of thing…girls and guns…but the whole dance tie-in doesn’t work for me, nor does the cheesy “Sailor Moon” outfit she sports throughout! lol The gals do always have flawless makeup and lashes on though..but overall, thumbs WAAAAY down. The story is just way too jumpy and forced, chemistry among the actors is awkward and the entire premise is too silly for me. Hmmm..maybe that’s why  it’s “fantasy!” I’d classify the whole thing as weird, my advice… save your eyes and 2 hours of your life…go out to eat instead!