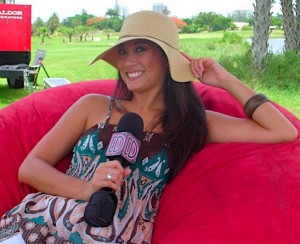 Aubrey Aquino is a TV Host and Reporter from the Bay Area, CA.  She is the host of California Bountiful, a weekly lifestyle show highlighting the Golden State’s amazing agriculture, food and lifestyle. She is a long-time media professional working in lifestyle and entertainment television, also serving as a host on ABC7 Bay Area LIFE, Your California Life, The Hampton Roads Show in Virginia, as well as Miami’s Deco Drive. Aubrey also spent many years as a host of Comcast Newsmakers, and is once created the  innovative sports show, On The Flipside. Her other television projects have also included work at KRON4, HEAT TV and The Welcome Channel, plus she appeared on E! News, Fox Sports Net, CNN and the NFL Network. To her credit, she’s interviewed countless celebrities like Hugh Jackman, Meryl Streep, Miley Cyrus, John Travolta, P. Diddy, Billy Bob Thornton, Forest Whitaker, Shaquille O’Neal, Patrick Dempsey, Serena Williams, Eva Mendes, Ne-Yo, Ludacris, Dwayne “The Rock” Johnson and Steven Tyler. The “fun” side of Aubrey’s work has included wrestling an alligator in the Florida Everglades, feeding stingrays in the Bahamas and paddle surfing in the Atlantic Ocean! She has even worked in radio as on-air talent and in the music industry as an artist manager.

Aubrey made her national television debut on the first season of the ESPN original series “Beg, Borrow and Deal.” The reality show pitted her team against another in a cross-country race where they had to complete sports related tasks, relying solely on their wits and sports knowledge, carrying only their ID’s and the clothes on their backs!

A unique accomplishment for Aubrey is her experience dancing for three professional sports teams. In her two seasons with “Football’s Fabulous Females,” Aubrey was featured in the Oakland Raiderettes calendars, and even landed in the video game NFL 2K3, where game creators used motion sensors to capture her moves, to use for the animated cheerleaders in the game. She also had a stint with another NFL team, the Arizona Cardinals Cheerleaders. However, her first Pro Dance experience was in the NBA, as a member of the Sacramento Kings “FastBreak.” Aubrey is a published author, contributing her writing skills and knowledge about the world of Pro Cheer and Dance, in The Ultimate Guide to Becoming a Pro Cheerleader, and a short story in Miso for Life: A Melting Pot of Thoughts.

Aubrey was born and raised in the Bay Area, California, and earned her B.S. in Broadcast Journalism from San Jose State University. To date, her unassuming personality, jet-set lifestyle and blossoming career has taken her all over the U.S. and abroad, but she’s not slowing down! She plans to continue working in the entertainment industry, traveling and making more new friends along the way!

Aubrey also blogs about motherhood and parenting on 53 Weeks.